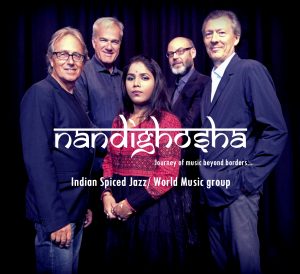 The name ‘NANDIGHOSHA’ means ‘Joy of Music’ rightly signifying the group’s interest and effort to produce and create music for the global audience meaning audience beyond borders by combining different world music genres. The name has also connection with Bijayashree’s native place Odisha, one of the eastern states of India, where people worship Lord Jagannath of Puri and his chariot name is Nandighosha.

Bijayashree believes the annual festival of Lord Jagannath’s Ratha Jatra / Chariot Festival in Puri in which the deities come out of their temple so that everybody across the world beyond cast, creed and religion can see them is a festival signifying universal brotherhood, unity & integrity through embracing humanity and love beyond everything else.

Currently, NANDIGHOSHA Group is working on Indian compositions (involving originals as well as traditional) in connection with western harmonic music to infuse colors of jazz music on Indian melodies and vice-versa wherein all original compositions are by Bijayashree Samal and Bruno Steffen.

‘Tarana’ is an ambitious and debut music CD/ album by ‘NANDIGHOSHA’, a group of  highly enthusiastic, extremely creative and passionate musicians hailing from different countries like India, Switzerland, Germany and UK. The group believes that MUSIC is universal and any musical traditions, genres or languages cannot be a barrier to encompass it within certain border or make people dance to its tunes. What is important, is to create a sound or a melody that resonates in the hearts of people in general and touches their soul.

‘Tarana’ has nine enchantingly beautiful original tracks composed by Indian classical singer/ composer Bijayashree Samal and arranged by Jazz pianist Bruno Steffen. True to their belief and intention, the music album reflects a sound that is a master class blend of the serene and timeless Indian Raga influenced compositions with the flamboyant Jazz.  Bijayashree’s  flawless singing along with her magical voice surrounding Jazz and world music arrangement by Bruno Steffen, is creating an ambience of joy, contentment and positivity. This is an excellent album showcasing the true fusion of Indian classical with Jazz.  It’s been already featured by major musical magazines in Swiss. See Here

‘NANDIGHOSHA’ group is giving concerts in and around Switzerland and is open to collaborations with enthusiastic and creative artists in any world music genres.

For concerts, workshops or collaborations, Please write to: