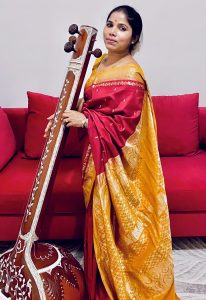 Bijayashree Samal is an Indian singer, composer, teacher and graded artist of All India Radio. Founding member of International Indian spiced Jazz/ world music group  ‘Nandighosha’ and a member of Beyond Music  by the Swiss non-profit Beyond Foundation together with Tina Turner.

Bijayashree is based in Switzerland since 2006  and teaching Indian classical music at Ateliers d’ethnomusicologie (ADEM), Geneva and  Zurich besides playing in concerts and teaching world wide through online classes.

Over the years, Bijayashree has  gained popularity due to her successful world music collaborations involving artists of international acclaim. Bijayashree has worked with many internationally acclaimed artists like multiple Grammy Award winning artist and producer Larry Klein, Manu Katché, Ohad Talmor , Dan Weiss, Miles Okazaki, Shridhar Phadke, Multiple Grammy winning artists and producers Bill Laurance  and Michael League  of the famous Snarky Puppy band, David Greilsammer  Paul Grant and many other renowned and talented artists from all over the world.

Blessed with an extremely melodious voice, she is known for her divine and clear rendition and has enthralled the audience by her captivating live performance. Bijayashree has been performing internationally since 2006 involving several prestigious venues and organisations in many places like India, Switzerland, France, Germany, Liechtenstein etc. and has been featured in both print and electronic media like CNN Money, JazzTime, Jazz & Blues Magazine, Jazz n More,  Liechtensteiner Vaterland, Volksblatt, ‘The Hindu’, Times of India, Statesman,  The Indian express, Dainik Bhasker, Kalinga TV, All India Radio Interviews, DD National etc.

Her world music band ‘‘Nandighosha’  has Jazz and world music artists from Switzerland, Germany, UK and India who work collaboratively to produce original music  that reflects the colours of Indian classical, Jazz and other world music genres.  Their debut CD/ album ‘TARANA’ by Unit Records, Swiss has been released on 6th of Dec 2019 and has been featured in major Jazz magazines in Europe. It was released by Honourable President of ICCR (Indian Council for Cultural Relations) Dr Vinay Sahashrabuddhe at Indo-Swiss Centre, Zurich.  ‘TARANA’ is now available in all music platforms iTunes, Spotify, YouTube Music, Amazon, ebay, Deezer, CeDe etc.

In April 2019, Bijayashree’s original composition DIVA (A Bird by Choice) won the BEYOND PUBLIC AWARD in the international original music competition by BEYOND music foundation, Switzerland. She was then invited by multiple Grammy Award winning producer Larry Klein (USA) and Beyond Music (Swiss) to work in the music album ‘Same Sky’ at Studio La Fabrique in France.  ‘SAME SKY’ (vol.1) was at Top #1 in world music album list in USA on iTunes in Oct. 2019.

Currently Bijayashree is working with multiple Grammy winning producers (Snarky Puppy)  Michael League and Bill Laurance for the upcoming World music CD, Vol 3 by Beyond Music (2022). Other-than this she is involved in many international collaborations involving artists from different countries through her Nandighosha Band producing original music.

Bijayashree is trained in Hindustani classical vocal under the Gwalior gharana and Odissi vocal. She holds a Visharad degree in music from Akhil Bharatiya Gandharva Mahavidyalaya and academically, a Doctorate degree in Chemistry. She has five international publications in Chemistry to her credit  and was a lecturer in Chemistry in one of the prestigious colleges in Bhubaneswar, Odisha before she decided to quit Chemistry to follow her passion for music full time.

Besides singing and composing, she loves to write poetries and articles in Odia, Hindi and English and can speak and read Odia, Bangali, Hindi, English, French and to a minimum extent German.

Born to Dr Narayan Chandra Samal, a Chemistry professor and Mrs Sanjukta Samal, teacher and a Hindustani Classical vocalist, Bijayashree grew up in a small town called Kendrapara in Odisha, an eastern state of India. She picked up music as easily as her childhood games, learning music from her own mother which helped her to qualify the prestigious and acclaimed audition for All India Radio (AIR) at a very early age. As an approved child artist, she recorded her first assignment of three songs for AIR at the age of ten.  At a later stage, she took extensive training in Hindustani classical vocal from Pandit (Dr) Chittaranjan Pani, one of the leading vocalists of India under the famous Gwalior Gharana. Bijayashree became a graded general artist of All India Radio in her twenties due to her persistent interest in music, hard work and sincerity while pursuing her Doctorate degree in Chemistry at the same time. She used to teach Chemistry to undergraduate and graduate students in two of the premier institutions called MCNL and KIIT in Bhubaneswar before relocating to Switzerland.

Currently, she is learning the intricacies of advanced Ragas under the direct guidance of Pt. Sanjeev Abhayankar, an internationally acclaimed and divinely gifted Hindustani classical vocalist under the famous Mewati Gharana; a disciple of Padma Vibhusana/ Sangeet Martand Pandit Jasraj .